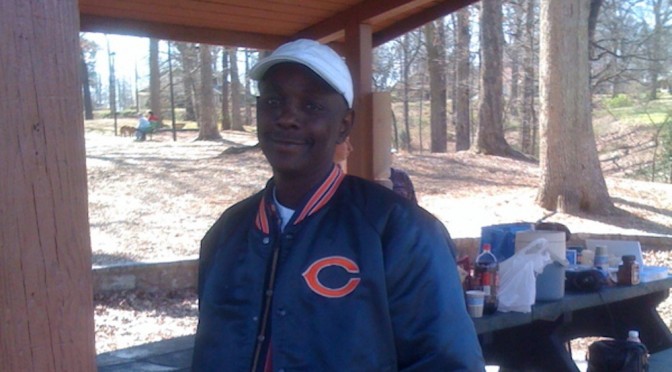 We want to share with you the story of a dear friend of ours, Charles Harris.  We didn’t realize how truly special he was until he explained to us how he came to be in our midst at Gentle Spirit Christian Church about two years ago.

The simplest way to tell it is just that he turned up one day.  He was hungry more than anything, so he waited through the service and the sermon, and he enjoyed a sandwich at the picnic luncheon that followed.  When we asked him where he lived, he pointed to the east and said he lived under an overpass.

The reason Charles liked that overpass was that the police essentially ignored it — and with no ID and a powerful addiction, Charles found it easiest to stay out of the way of the police while nursing his addiction and foraging for food.

Not that Charles preferred this life; what he really wanted was to get off the streets.  Which is next to impossible if you’re in the grips of an addiction, so Pastor Paul urged our new friend to consider getting clean and invited him back the next Sunday.

The next Sunday, Charles showed up again and quietly offered a prayer of thanksgiving for seven days of sobriety.

A year later, we had helped Charles find housing and employment, and he never missed a Sunday service in the park.  In fact, when his supervisor attempted to schedule Charles to work on Sundays, Charles told him point-blank that going to church every Sunday was part of his recovery, and that without his recovery he doubted that he ever would have returned to work.

And then, just as quickly as God brought Charles to us, God called him home.  The substances Charles had put into his body had taken their toll.   Charles always understood this might be the case, and so did we. Still, we were devastated.

Later, we began to understand why it was that we became Charles’ last stop before going home.  And we’re grateful for that opportunity.  Charles had a beautiful smile, and during his time with us he always seemed to have it on.

So when people ask us why for four years running we’ve been worshipping in a park, year-round in all sorts of weather, Charles is part of our answer.

Any given week finds us helping people just like Charles.  We empower them to find food, housing, transportation, employment, recovery.  Sometimes it’s just about providing care, hope and love.

But no matter how we’re able to help, we want first and foremost for those in our midst to believe in themselves — to believe that no matter where they are in their lives, they still have a chance to find the things that have eluded them.  It’s why we start every service by greeting each other and saying, “You’re in the right place.”

Next week we know there’ll be someone else who believes they have no one to turn to, and we’ll be there to assure them that they do.

It doesn’t take much to help someone get back on their feet.  For instance, only $10 helps secure a bed for someone spending their first night off the streets.  $17 helps someone afford a MARTA Breeze card to get to their new job for a week; $68 does the same for a whole month.

If you would like to help us continue this ministry, just click on the You Can Help tab above to learn how.

We are deeply grateful for whatever you can do, and we wish you many blessings.