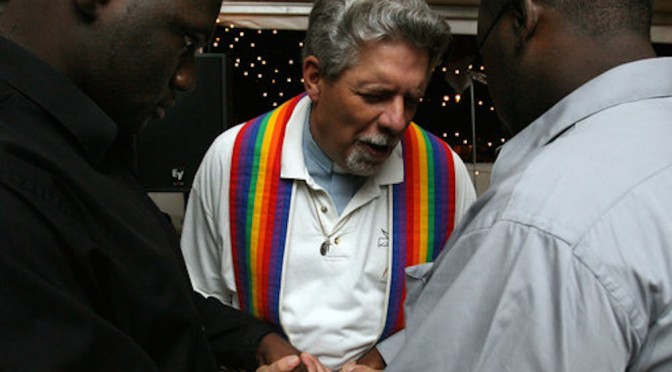 What’s the truth about the Bible and gay people?

If you’ve ever been told that the Bible condemns you because of your sexual orientation, You’re in the right place. In fact, nowhere in the Bible are same-sex committed and loving relationships condemned. On the contrary, here’s what the Bible says on the subject:

For God so loved the world that God gave God’s only begotten son, that whosoever believes in him shall not perish, but have everlasting life. (John 3:16)

Below is the truth that counters three commonly told lies about what the Bible says about homosexuality — plus here’s a complete Bible study on homosexuality and transgenderism.

The Truth: The purity laws of the ancient priesthood are a code of ethics rooted in a time and culture that is far removed from today’s world. Among other things it forbids shaving, wearing clothing made of two different materials, eating rare meat, and many other things. The edict against homosexual sex is part of this code, no more or no less important than the verse that forbids harvesting an entire field of grain or piercing an ear. It is important only as a historical document, not as a set of rules to follow in this time.

Lie #2: Sodom was destroyed for the sin of homosexuality.

The Truth: Sodom and homosexuality were not connected until the middle ages. In Biblical days it was acknowledged that Sodom was destroyed for greed and inhospitality. While some believe that it was probable that the men of Sodom were bent on raping Lot’s visitors, this was an act of violence, not an indication of the sexual preference of the male population of the city. There are many references of Sodom in the Bible (Ezekiel 16:49 and 2 Peter 2:6-8, among others) but none of them mentions homosexuality.

Lie #3: There are scriptures affirming the Biblical condemnation of homosexual sex.

Embrace the truth and reject the lies, the kingdom of heaven is for all!