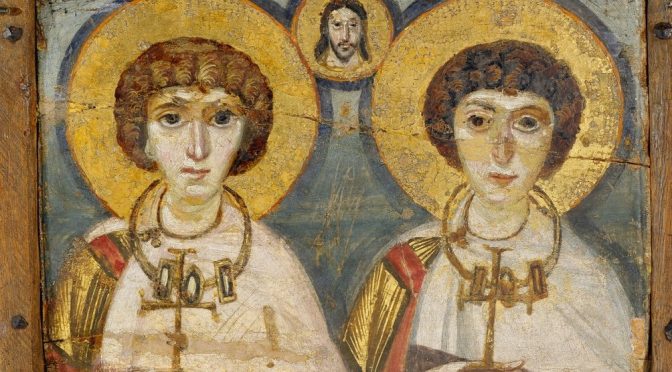 Gay Saints (And Bi-Positive Ones)

Icebreaker: Who is someone that was a strong role model to you growing up? What are some things they role-modeled for you? How did that help you grow as a person?

Explain that in Christian tradition, Christians have always found role models in the saints, or heroes of faith, who modeled walking with God in various circumstances in history. Explain that not only does the Bible not condemn same-sex romantic relationships, but it also provides models of individuals who have faithful, God-centered loving relationships with people of the same sex. Today we are going to be looking at a few of these models of faith in Scripture, as well as one from history, and examining what lessons these gay, bisexual and bi-affectionate saints teach us.

Have folks go over the following saints, discussing their relationships and the examples they give:

Ask: Can anyone recall the story of Naomi and Ruth? What lessons does it teach us?

Explain that there is no real evidence that Naomi and Ruth were lesbian lovers – in fact, Naomi is Ruth’s mother-in-law and the book of Ruth is a record of the romance of Ruth & Boaz, a heterosexual romance.

That said, this is a positive account in the Bible of same-sex love. Ruth’s confession to Naomi here is a startling expression of love and commitment.

Consider what sort of faithfulness Ruth has to Naomi. When Naomi returns to her home country, though Ruth has no requirement to do so, she decides to go with Naomi, leaving all she has known to be by Naomi’s side. She chooses to take on Naomi’s religion, family, and culture. She chooses to leave all she knows simply to accompany Naomi in Naomi’s journey in life.

Explain that here we see a same-sex relationship between Prince David and Prince Jonathan.

Explain that, though there remains some argument among scholars as to how sexual David & Jonathan’s relationship was, it clearly was one involving same-sex love and commitment, and even physical intimacy between two men. The Bible describes them kissing and holding each other here, taking their clothes off as they do so. There is even some language that could be a double-entendre in Hebrew for sexual contact.

Many scholars feel that this is an example of David and Jonathan as homosexual or bisexual saints. They obviously preferred each other’s company, love, and intimacy to the type of intimacy that they experienced with women. They even go so far as to forge a covenant between each other – the same sort of language is used here as would be used for a marriage agreement in the Bible, if it involved a man or a woman.

And all of this is done in these passages with descriptions that put this relationship between two men in a positive light.

Ask: What can we learn about God’s view of same-sex relationships based on how positively the Bible portrays this intimate, physical, long-term love relationship between two men?

3. The Centurion and His Boyfriend

Ask: What does this story describe?

Explain that there is an element to this story that people don’t always pick up on. In Greek, the word translated into English as “servant” is different than the usual word. Normally doulous or diakonia are used in biblical Greek for “servant.” Instead, the word pais is used.

This is important because in Greek pais was not used for your run-of-the-mill servant. Instead, it was mainly used to describe the romantic same-sex companion of a notable official, who was usually younger or of a different social class than the older romantic partner. The pais would both be a romantic companion and a personal assistant to the important official.

So, most likely this story is about a soldier and his romantic companion/personal assistant.

Ask: How does this story appear differently when read in this context?

Does Jesus talk positively about the centurion or negatively?

Does Jesus say anything negative about the centurion and his companion’s relationship?

Explain that our final example of a gay or bi-positive saint comes not from the Bible but from church history. I am sharing this one because of the fact that oftentimes I find anti-gay activists claiming that accepting gay relationships as equal to straight relationships is something crazy made up by modern liberals which would make early Christians turn over in their graves. They say that Christians have never accepted LGBTQ+ people as people who could be close to God or used by God while they were in same-sex relationships and we don’t have any right to try to change the rules of the game now.

Have someone read the story of Saints Sergius and Bacchus.

Ask: What does this story teach us?

Explain that here we find that a gay couple were declared saints – people who were models of faith to be emulated – in the first few centuries of the Christian church. Their love was considered a model for people both gay and straight to emulate. No one in the early church saw their relationship as an obstacle for them to be able to be counted as good Christians, as children of God, or as people God could work miracles through.

It was later on, as Christianity became the official religion of the empire, that Christian leaders began to enact rules that excluded people such as women and LGBTQ+ people from church leadership and Christian leaders began to make anti-LGBTQ+ rules commonplace. In fact, there are historical records of same-sex couples committing to share their lives with each other, to love each other, til death do us part, and receiving prayers of blessings at Christian churches during this period as well.

For more about LGBTQ+ saints and martyrs, visit the QSpirit blog on the subject. Whosoever has also published the following essays about these biblical/historical figures: