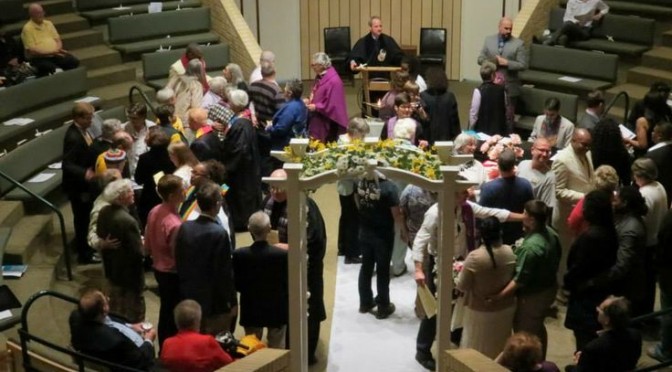 The Book of Genesis and Gay Marriage

Before you begin, Ask if anyone had a chance to look at the verses given for homework and if any had found any that struck them or challenged them particularly. Ask also if using the five tools helped them understand the passages any better.

Explain that today you are going to be looking at what, if anything, the first book of the Bible says about homosexuality.

Ask: Before I get started, what are some things you have heard the Old Testament says about homosexuality? What do you think of those things?

Explain: The first place we are going to look at is in the very beginning of the Bible, in fact the book whose name means “in the beginning” – the book of Genesis.

Ask: Does anyone know of anything that this first book of the Bible says which might apply to a discussion on homosexuality?

Explain: Well, probably one of the first places in Genesis people turn to is Genesis 1 and 2.

Probably people will make reference to the oft-repeated statement, “God made Adam and Eve, not Adam and Steve.” Some people may make the point that the verse doesn’t talk about homosexuality at all.

Here are some key issues to address:

Explain: Some people will quote this verse and say “It isn’t Adam and Eve, but Adam and Steve.”

Ask: Do these verses say anything against same-sex relationships?

Point out that, despite what some Christians want to claim, Genesis doesn’t get into a lot of specifics about a lot of things. It doesn’t give a lot of specifics, from a scientific standpoint, about the process God uses to create life, for instance. Likewise, the verses don’t give any specific instruction on same-sex relationships. We are told God made humans male and female and told them to have sex, thus reproducing, and to care for and shape God’s creation. And we are told the first two people are called Adam, meaning red mud, and Eve, meaning life, and are male and female. We are also told, generally speaking, the reason a man leaves his family of origin and cleaves to his wife, but we aren’t told one word about why some men do the same thing but cleave to a husband – and why some women cleave to another woman. The verses here do not say this is bad. But, they also do not say it is good.

Some people jump to the conclusion that since Genesis 1 & 2 don’t describe same-sex relationships that [these relationships] are necessarily wrong. Yet, is this really fair? Not really. Genesis 1 & 2 also don’t describe OB/GYN’s who help with the pregnancies resulting from heterosexual sex that we use today. It doesn’t describe college education. It doesn’t describe mass transit, automobiles, or even wedding ceremonies at a church. We don’t jump to the conclusion that OB/GYN’s are wrong, that getting a college degree is a sin, that riding buses or cars is evil, or that it is a sin to have a wedding ceremony at a church, even though Genesis 1 & 2 don’t describe these things. So you can’t use Genesis 1 & 2 to really condemn or praise same-sex relationships. You have to turn elsewhere – whether to other verses in the bible, to science, to personal experience, or to your own prejudice – to do that.

Do these verses say anything about transgender and intersex identity?

In a word, no. We are told God creates human beings male and female, but Genesis 1 & 2 don’t say anything about other categories folks might find themselves in. We aren’t told if all humans will be male and female, or how God views those who are born not fitting neatly into the category of male or female.

Ask: Does this necessarily mean being transgender is wrong?

Explain that, again, you have to look somewhere other than these verses to determine that. They simply don’t talk about the phenomenon at all. These verses only speak in general terms about gender, sexuality, or even the way life began, in order to teach some fundamental principles that apply generally to all people. They don’t get into exact scientific detail about every part of how life began or about gender diversity or sexual orientation.

Remember what we learned happened to Martin Luther, the pope, and John Calvin during the Renaissance when they tried to treat the Bible as a science book: They condemned as heretics folks who found scientific evidence that the earth circles the sun, not the sun the earth. They did this because the Bible did not directly describe the earth circling the sun, but used poetic language about the sun rising and setting. They made fools of themselves, because that wasn’t really what God was ever saying. Something similar could happen to us if we out-and-out condemned ideas such as evolution, same-sex relationships or transgender identity because they are not explicitly described here in Genesis 1 & 2. God’s silence in Genesis 1 & 2 only means we have to look elsewhere for these answers, not that the things God does not describe are wrong.

Ask: If Genesis 1 & 2 don’t tell us directly whether same-sex behavior is right or wrong – and whether or not being transgender or intersex is alright – does it give us any principles that can we can use to figure out how to apply what we learn about these phenomenon elsewhere? Taken together with what we now know about sexuality and gender from science, what lessons can Genesis 1 & 2 teach us?

It doesn’t answer questions about whether it is wrong to be gay, because when Genesis was written, the idea of sexual orientation hadn’t been discovered yet. But if people are born gay or transgender, as most scientists now claim, Genesis 1 & 2 can answer questions such as: Is my sexuality a mistake? What is the purpose of my sexuality?

What does this story tell us about these things?

This story tells us a number of positive things:

First, none of us are accidents. Whether we are Adams who want Eves, Adams who want Steves, Eves who want Liliths, Adams who would be fine with either Steve or Eve, or Adams who don’t want anybody right now, thank you very much – God made us. God made us with a powerful purpose: To reflect God’s image, God’s character in this world.

A similar message applies to transgender and intersex people, who science now largely agrees are born the way they are. For the transgender person, the reality is that while your life circumstances might be personally difficult, involving surgery, discrimination and/or low self-esteem, the way you are born is no mistake. God has a reason you were born with a body of one gender and mind of another (or not easily fitting into the category of male or female). By being yourself, it could be said that you at least partly reflect an image of the God who is described as both mother and father in a unique way.

Also, God made us to be with others, too – that is a part of what it means to be in God’s image. That humans are made man and woman together shows that we discover our purpose best with others – with friends, with church family, and (for those of us called to be in a relationship) with a loving partner. We discover how to be God’s image in the world through our relationships with each other.

And, I think, Genesis shows us that this is a part of the reason for the gift of our sexuality. The fact that men and women are made for each other is called good by God. Our sexuality is a beautiful gift. And though this passage doesn’t say whether or not homosexuality or bisexuality is natural, modern science has found both to be natural varieties of sexual orientation, through empirical study, using the reason and experience we spoke about previously. Almost universally, psychologists who don’t have some preconceived political agenda argue that homosexuality and bisexuality are no more wrong than being left-handed, red-haired or brown-skinned. It is a natural part of the diversity of nature.

So if this is the case, which isn’t a question Genesis answers, but which science does, then Genesis shows us that all our natural variations – our skin color, our gender, our gender expression or gender identity, our sexual orientation – are gifts from God, given by God to give us yet another glimpse at a part of who God is. That means gay is gorgeous, bi is beautiful, lesbianism is lovely, and being heterosexual can be sexy. Each of these variations show us a part of who God is in a way that something else wouldn’t.

A big part of how God uses our sexuality is hinted at in this narrative.

Ask: Why does God give Adam and Eve their sexuality?

Genesis 2 makes it sound as though there is something missing from Adam that renders him incomplete without it. If you wanted to, you could say he is not completely made until he finds the person who completes him. That is why it is not good for Adam to be alone. God makes Eve for Adam to be Adam’s “helper,” his “partner.” The two are to complete each other. Through their relationship of love, of trust, and of mutual respect, they are to help each other become who they were meant to be, become the best “them” they can be. And their sexuality is a beautiful instrument of this. It is what makes them leave their parents of origin, cling to each other, and become one. In one sense, this describes the physical act of sex – two people joining their bodies. But in reality, it really describes an ongoing process of building each other up, of getting to know each other, an emotional and spiritual process of transformation. And our sex drives and our sexuality are a large part of the drive toward us doing this with another person. Our sex life with whomever it is that completes us is a sort of super-glue that physically, emotionally, and spiritually binds us to each other.

What does this teach us about the purpose of our sexuality – be it gay, lesbian, bisexual or hetero-sexuality?

The purpose in our sexuality isn’t just our pleasure, it isn’t to exploit others, but for our sex drive to be the driving force toward and centerpiece in a union with another human being, a union which helps both you and your partner become the complete person God made you to be.

As we step away from homophobic readings of Genesis and let modern sexology‘s studies on sexuality fill in the gaps which Genesis leaves, we can see Genesis’ beautiful lesson.