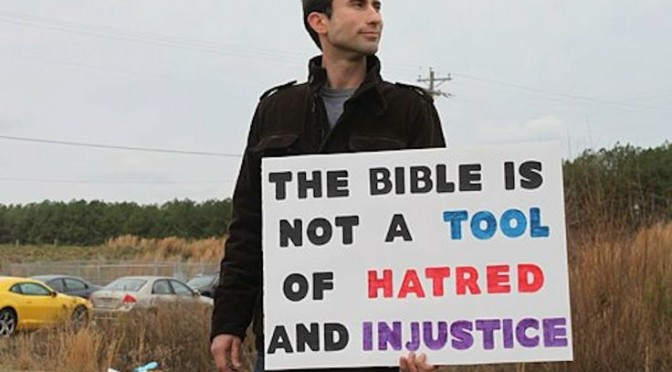 Icebreaker: Ask the group members whether they are right-handed, left-handed, or ambidextrous. Ask them if they have ever had a time they had to do with one hand what they normally do with their dominant hand. What was difficult about it? What was easy? In what ways would they say this was “against their own nature”?

Explain: We’ve spent the last several weeks looking at what the Bible does and doesn’t say about homosexuality. There are still a couple more passages that we need to discuss in order to be able to understand the references that people often make when they say that God condemns homosexual behavior, or homosexuals in general. Today we’re going to focus on one passage specifically.

This is a passage that people often use to say that homosexuality is an “abomination” or a “detestable act.” They use those two very verses, standing alone, and say that they prove that God says homosexuality is a sin. What I’d like to do today is to take what we just read in context.

(Potential additional idea: You may want to share Homosexual behavior in animals  at this point and ask How does how often same-sex behavior occurs in nature affect the use of “natural use” in this text?)

I’d like to go around and have each of you read five verses, starting with Romans 1:1, and we’re going to read the entire first chapter of Romans.

Now that we’ve read through the first chapter, I’d like to point out a couple of reasons that this chapter is misused when people say it deals with homosexuality.

Ask: First of all, what exactly is homosexuality?

Allow discussion, then say: It is a sexual attraction of one individual to an individual of the same gender. With that context, I make my first point.

In several different translations of Romans 1:26-27 the point is made that the individuals in question were given over to exchanging natural lusts for unnatural ones. The women were with the women and the men were with the men. Consider this for a second. Ask: Whose natural tendencies does it go against to be with the same sex – a homosexual or a heterosexual? Who does this make it likely Paul is describing as going against their own nature in these verses?

This brings me to a second point.

Ask: What in this was God really upset about? Is even sex the main issue here?

In that context, it’s fitting that what is said to bother God in this passage has to do with action only insofar as it is a manifestation of what is going on inside the people’s hearts. In Romans 1:21, it becomes clear to us that the problem with what is going on is that the people have taken their eyes off God. This is what disturbs God the most; this is what hurts God. What the people are doing is a manifestation of having taken their eyes off God and putting other things in God’s place. This isn’t to say that what the people are doing here isn’t wrong – it is – they are misusing the God-given gift of sexuality not out of any orientation, but out of selfish desires.

Explain that perhaps the most important point to make about this passage with regard to the question of homosexuality is that, again, this passage does not speak about the loving, committed, monogamous relationship that two people of homosexual orientations can have. As I’ve said before, it doesn’t even speak of homosexual orientation, but rather of heterosexuals who are acting in a way contrary to their nature. Furthermore, there is nothing loving or committed, or least of all monogamous about the things that are going on in this passage. It is, as I have said, an orgy. There is no regard for morals in this situation and, to put it in modern terms, each individual involved is treating one another like a piece of meat rather than a child of God.

So we’ve seen several things in this passage. We’ve seen, perhaps most importantly to the purpose of this Bible study, that this passage actually speaks not at all of the homosexual orientation, but of people of heterosexual orientation acting in a way contrary to their nature. The issue in the situation, and the sin had to do with how the people were treating God and one another, and not at all with what gender people were attracted to naturally.

We’ve also seen that what went on in this passage was a manifestation of people having taken their eyes off God and, as a result, the things they did were done in the spirit of gluttony and selfish desire and not in the spirit of love.

There’s one last thing that we’ve seen, though, that I think we need to touch on briefly before we close.

Ask: What positive lessons can these verse give us about what we need in our romantic relationships?

Explain that we’ve talked about the fact that God cares most about the condition of our hearts – with what is going on inside of us, which is what causes our actions. If we are acting out of a true desire to please God, and to show love to one another while our actions might not always be perfect, we will please God. When we act our of our own selfishness, and put pleasures of this world above God in our lives, God is displeased. Each of us, in the way we live, are striving to please God. There was something in the passage in the behavior of the people that was very much not glorifying to God. The question we need to ask is not what gender are the people in our relationships but, in the loving relationships among the people in this room, are we seeking to glorify God? God sees the condition of all of our hearts. He knows greed from honest, true and committed love and he’s pleased with those of us in whom he sees a genuine love for our fellow man – or woman. This is true regardless of our sexuality.