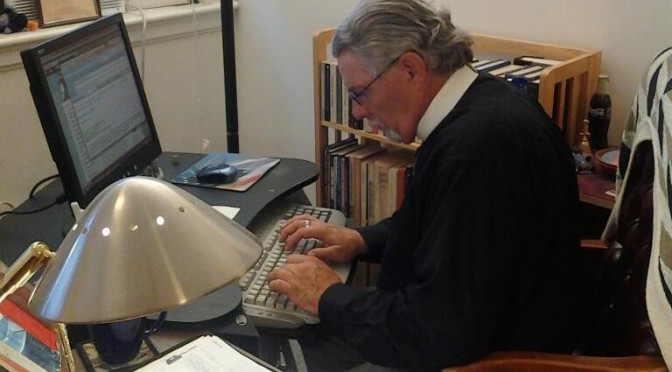 We all know that feeling of talking to someone who’s not really listening to what we’re saying. They can hear us just fine, but they’re not listening: They’re distracted, they’re not taking it all in. They’re too wrapped up in their own thoughts to listen to ours. They’re nodding their head, but in that vaguely distracted way that means they’re either waiting for their turn to speak — or worse, they actually wish we weren’t saying anything at all.

And right now, that’s how America feels to me: For the most part, we’re vaguely nodding our heads over what’s happened in Ferguson, New York and Cleveland — but there’s not a lot of real listening going on. And there are certainly some who seem as though they’d be happier if no one were talking at all.

I wish that what has gone on recently in this country were something unique, something out of the ordinary. But sadly it is not. In fact, it is business as usual in the United States of America.

An unarmed teenager killed in Ferguson, Missouri. A 12-year-old boy shot dead in Cleveland. A white police officer on video choking a black man to death in New York City.

Furthermore, there has been a book’s worth of these situations sprinkled over the last 30 years of our history. And the explanation for these events has not changed that much. Jim Wallis of Sojourners does a good job of distilling the debate:

Many white Americans tend to see this problem as unfortunate incidents based on individual circumstances. Black Americans see a system in which their black lives matter less than white lives. That is a fundamental difference of experience between white and black Americans, between black and white parents, even between white and black Christians. The question is: Are we white people going to listen or not? White Americans talk about how hard and dangerous police work is — that most cops are good and are to be trusted. Black Americans agree that police work is dangerously hard, but also have experienced systemic police abuse of their families. All black people, especially black men, have their own stories. Since there are so many stories, are these really just isolated incidents? We literally have two criminal justice systems in America — one for whites and one for blacks.

So to say that what is going on with the police in this country is not racial is both naïve and willfully ignorant. What Wallis is saying now is the same kind of analysis applied in the 1960’s concerning the Black and white communities.

What has happened since the 1960’s is 9/11. Our focus has shifted from being in communities trying to figure out how to live together to being in a culture of fear and a complete lack of trust of each other, and that has affected the relationship between the Black and white communities.

Our police have gone from being agencies focused on a mission of “To Serve and Protect” to agencies that look more like military occupying forces. In fact, upon further thought it doesn’t just look like that, it is in fact just that!

I am well aware that not all police officers are like this. The issue is not so much about specific situations or occurrences, but rather about this overall shift in mentality in policing practices in general. Military equipment spreads military mentality. We do not need military mentality on the streets of Atlanta, or Tucker, or Doraville.

In the public arena, we ought to recognize that it is empirically true that African-American men are more likely, by virtually every measure, to be arrested, sentenced, executed, or murdered than their white peers. We cannot shrug that off with apathy. Working toward justice in this arena will mean consciences that are sensitive to the problem. But how can we get there when white people do not face the same experiences as do black people?

Later, in response to the Staten Island decision, he added:

… a government that can choke a man to death on video for selling cigarettes is not a government living up to a biblical definition of justice or any recognizable definition of justice… It’s time for us in Christian churches to not just talk about the gospel but live out the gospel by tearing down these dividing walls not only by learning and listening to one another but also by standing up and speaking out for one another.

The investigations following these tragedies just seemed to add to a more militaristic approach in America in 2014. The decisions from the grand juries followed an appalling national pattern where police officers use excessive and sometimes fatal force against people of color and are frequently not held accountable.

In order to change, we must make a new commitment to listening — not just hearing, but really listening.

Again, Jim Wallis captures this idea fully when he writes:

Are there police uses of force that are understandable and justifiable? Of course there are. If our society wasn’t steeped in a gun culture, many of these shootings could be avoided. But has excessive, unnecessary, lethal force been used over and over again, all across the country, with white police killing unarmed black civilians? Yes it has, and the evidence is overwhelming. But will we white people listen to it? Will white parents try to imagine how it would feel to have “the talk,” to tell their own children that they shouldn’t trust those who are supposed to serve and protect them? That’s hard to listen to, hard to hear, hard to recognize the legitimacy of other parents’ experiences when they are so different from your own. It’s time to listen — for us white Americans to listen to black Americans; for white parents to listen to black parents; for white Christians to listen to black Christians. This may be the most important thing we have ever had to do: to listen, really listen.

Once we are willing to listen as a people of faith, will we go back and once again give our full attention to that one solitary life that indeed changed the world?

Can we once again read Dr. James Allan Francis (from a part of his 1926 book, “The Real Jesus,” while Dr. Francis was pastor of the First Baptist Church of Los Angeles)?

Here is a man who was born in an obscure village, the child of a peasant woman. He grew up in another village. He worked in a carpenter shop until He was thirty.

Then for three years He was an itinerant preacher. He never owned a home. He never wrote a book. He never held an office. He never had a family. He never went to college. He never put His foot inside a big city. He never traveled two hundred miles from the place He was born.

He never did one of the things that usually accompany greatness. He had no credentials but Himself… While still a young man, the tide of popular opinion turned against him. His friends ran away. One of them denied Him. He was turned over to His enemies. He went through the mockery of a trial.

He was nailed upon a cross between two thieves. While He was dying His executioners gambled for the only piece of property He had on earth – His coat.

When He was dead, He was laid in a borrowed grave through the pity of a friend.

Nineteen long centuries have come and gone, and today He is a centerpiece of the human race and leader of the column of progress. I am far within the mark when I say that all the armies that ever marched, all the navies that were ever built; all the parliaments that ever sat and all the kings that ever reigned, put together, have not affected the life of man upon this earth as powerfully as has that one solitary life.

Now that we again have read this, hopefully we are convinced that one person can make a difference. Will we then look deep into the teachings of this “one solitary life” and see a ministry of inclusion, acceptance, and affirmation? Will we call for the unity of our faith?

Will we actually put into practice what we believe and what we say about the unity of “the body of Christ” or not? In the New Testament, 1 Corinthians 12 speaks of one body with many members:

For just as the body is one and has many members, and all the members of the body, though many, are one body, so it is with Christ…. For the body does not consist of one member but of many… As it is, there are many parts, yet one body… that there may be no discord in the body, but that the members may have the same care for one another. If one member suffers, all suffer together; if one member is honored, all rejoice together.

Will we again understand these words of Dr. Martin Luther King Jr., which speak a life-giving truth?

We are caught in an inescapable network of mutuality, tied in a single garment of destiny.

If we can do this, during our journey through Advent, this Holy Season in which we celebrate the birth of that “one solitary life”, there can be brought about peace.

Are you listening to what’s going on? Really listening? Or are you just nodding your head?