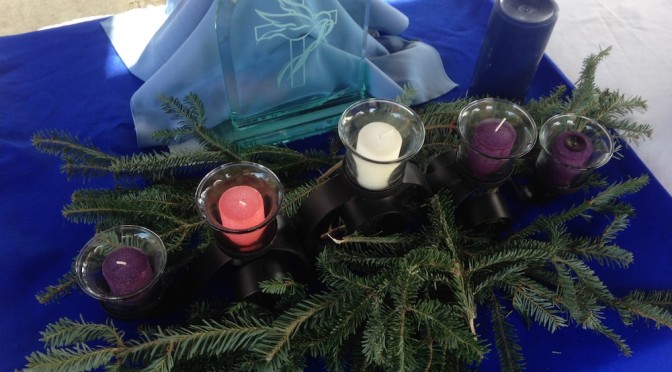 The Genesis of Advent
Starting in about the 9th century in the Western Church, the season of Advent has been celebrated as a period of preparation for the birth of our Lord and the beginning of the ecclesiastical year (Church year).

In the early church words Advent, Epiphany, and Nativity were used interchangeably to denote the “feast of the Nativity”. Advent services first appeared in the 6th century in the church of Gaul. Epiphany was observed as a baptismal festival and the period preceding it was utilized as a period of preparation for baptism, much like the season of Lent. So Advent originated as a type of “little Lent”. From France the observance spread to England in the 7th and 8th centuries. In the 9th century, Advent was finally incorporated into the Roman Rite.

The Meaning of Advent
The word “Advent” means literally, “to come to”. It is a special season when we celebrate the bold claim that the Lord of the Universe has come among us in human form through Jesus the Christ. In him we have Immanuel, God with us. Not only do we celebrate that God has come to the world in human form from Galilee but also that God is come as a spiritual reality and will come again in triumph at the close of the age.

There is another sense to the definition of Advent, “to come to”. Since God has, is and will come to us, therefore we need “to come to”. Our task as people in full relationship with God is to become fully awake not only to the importance of indwelling but also to the many immersions of Christ in our lives. None of us is fully conscious of God’s presence; we need to come to, to wake up, and be vigilant for the visits of God within history and at the end of time when God’s realm is fully realized.

The Mood of Advent
If God is coming to us and we truly believe that to be true, our mood will be one of excitement, anticipation, and joyful preparation. Mood is conveyed through color and light. As the awareness of the celebrative nature of Advent has grown, many congregations have substituted blue for the older tradition of purple, as we have done in our church. The brighter color of blue, the color of infinite sky, conveys better the bright hope of change and eternal life in the Christ than the more somber and sacrificial purple.

The Message of Advent
As we look at God’s word, we need to understand how the Christ (as the word of God) comes to humankind now and how we can receive and carry the Christ’s presence today. This starts with our attitude… and the guides for which can be found all throughout scripture. I am calling them “Advent Attitudes” — alertness, attentiveness, watchfulness, readiness, joyful anticipation, patience and receptivity. The task then becomes to take a journey over the next 4 weeks to come into a full consciousness with God, who comes to us in Jesus the Christ and in fact be prepared.

Founding and Senior Pastor of Gentle Spirit Christian Church, Rev. Paul M. Turner grew up in suburban Chicago and was ordained by the Universal Fellowship of Metropolitan Community Churches in 1989. He was called to Atlanta in 1994 to pastor All Saints MCC. Five years later he founded Gentle Spirit Christian Church. He lives in Decatur with his husband Bill, who he met in 1982 while living and working in Ohio and legally married in 2015.

Sunday worship service in Candler Park has resumed. All are welcome to attend according to your individual comfort level. Services are broadcast on Facebook Live via the Gentle Spirit Christian Church Group and posted on this website.

The church office is open. However, we are not providing in-person appointments. Call the church and pastor’s assistant will set up a meeting via Zoom or Facebook Messenger. Pastor Paul is always available via phone, email, and or appointment.