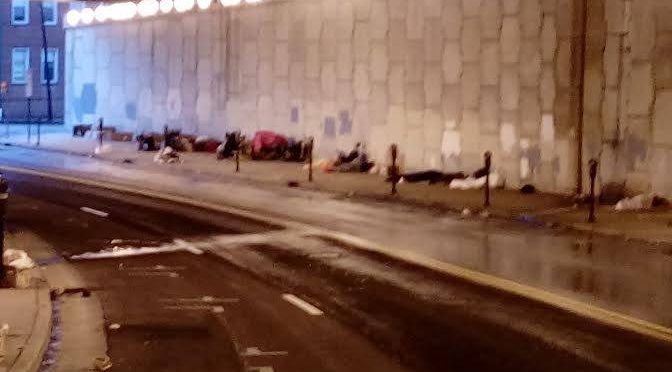 The above is a variation on a statement I saw on Facebook that really spoke to me — and apparently to more than a few of my Facebook friends, because my reposting of it went “viral” — at least as much as you could use that term to describe the reaction to something I’ve posted there.

This is in comparison to what I normally post on Facebook, which generally doesn’t raise eyebrows because it’s either “For The Day’s Journey”, my daily posting of a thought-provoking or at least inspirational quote from someone more eloquent (and renowned) than me, or “Welcome to the New Week”, my weekly Bible verse — or maybe just a rundown of the night’s dinner menu courtesy of my husband, who rules our kitchen and swears to me that it’s more than just where the coffee pot lives.

But back to that Paul-viral Facebook post. Had I struck a nerve? Had I tapped into a vein of social sentiment? Had I accessed the zeitgeist? I think so. I think a lot of people — not just my Facebook friends — are tired of the hypocrisy of “traditional”, conservative, “evangelical” Christianity.

I think people are tired of opening their Facebook feed to see what their friends are up to and instead slipping on the social media equivalent of a floor smeared with equine fecal matter in the form of such heartwarming fare as proclamations by none other than Roy Moore, Alabama’s self-proclaimed defender of the 10 Commandments, who pompously claims to have God’s ear when it comes to what is wrong with America — and who, despite losing his Senate race, still got 48 percent of the vote despite being generally a horse’s ass and specifically accused of (basically) pedophilia.

I think people are tired of seeing evidence all around them that their fellow man continues to act in such a short-sighted and self-absorbed fashion when confronted with situations where our instruction from God is actually, I believe, rather clear: Act justly. Love mercy. Walk humbly with God.

Here in Atlanta, just in time for Christmas, we’re ignoring that instruction as it concerns our homeless brothers and sisters. Here in Atlanta, we live in a city where the establishment fought shamelessly for the better part of a decade to shut down the city’s largest homeless shelter — which just happened to be situated on some seriously prime real estate.

Here in Atlanta, there was apparently no plan being made during that decade-long fight to account for how the 700-800 people the Peachtree-Pine homeless shelter was serving daily might survive with some semblance of human dignity.

Did I mention that every other shelter in town is already full?

But instead of focusing on how to get homeless people off the streets as winter approaches, your local government has determined that the best thing they can do for the homeless right now is to keep you from offering them food.

There’s apparently a local ordinance that prohibits the distribution of food in an organized way to, basically, strangers. And your local law enforcement is now hellbent on enforcing it.

Here’s what it says, according to a pamphlet that’s been proffered to yours truly on the streets of Atlanta by well-meaning law enforcement personnel (prefaced by a mealy-mouthed preamble in said pamphlet):

We sincerely thank you for your interest in serving Atlanta’s people in need. As providers of services to these groups 24/7, year-round, we are committed to helping them in ways that lead to changed lives and lasting self-sufficiency.

In our experience, the best way to assist people in need is through places with sanitary kitchens, safe shelter, and services that help them address their problems and move forward in their lives. By contrast, feeding and donating to people on our streets is not a long-term solution.

… Public Safety’s goal is to increase police visibility and improve the quality of life within the City of Atlanta’s Government District. This will be accomplished through the Enforcement of City Ordinances and State laws and Partners for Home and Atlanta Continuum of Care to address the homelessness…

Did you know a Permit is required?

(a) Permit required. A valid permit issued by the board of health shall be required prior to operation of a food service establishment. Such permit shall be obtained in compliance with the rules and regulations of the State of Georgia governing food service, GA. Comp. R. & Regs. 290-5-14

Rather than feeding or donating to individuals on Atlanta’s streets, please consider directing your generosity to one of the great organizations working tirelessly to improve the lives of people in need in our communities

The arrogance continues with a list of 10 organizations that the pamphlet recommends should be the real focus of our energy, we who so inadequately seek to serve the homeless. And let me be clear: I am not disparaging the groups themselves — which are for the most part reputable, worthy and doing good in the community. Rather, I’m pointing up the city’s sleight of hand in making it seem that these 10 points of light are adequately filling the gap in homeless services left wide open by the closing of Peachtree-Pine.

But that isn’t even remotely true, and here’s why:

So please tell me how, in all that is holy, are these people who are without resources or transportation, who are hungry, who can also be dealing with addiction or mental illness or disability — how are they supposed to access what the mealy-mouthed pamphlet blithely refers to as a continuum of care? How long should they wait? How far should they walk? And let’s be honest: Whose way should they stay out of?

And I’m so not done here. Because on top of all of this is the criminalization of homelessness. Here’s how it starts: In the state of Georgia, you cannot get a driver’s license or state ID without a birth certificate, Social Security card and two pieces of mail sent to your residence.

Yes, you read that correctly: Two pieces of mail to your residence. Good luck, homeless people!

Plus it doesn’t take longer than a couple of weeks for a newly homeless person to have lost whatever they might have been carrying all this documentation in to a beat cop who confiscated it, a fellow traveler who stole it — or simply to “the shuffle” of constantly being on the move and eventually losing track of almost anything.

The last time I went to renew my driver’s license, I had to mail $50 to New Jersey to get my birth certificate. How many homeless people can manage that?

Anyway, the next step in the criminalization of homelessness is that once you’ve pretty much lost the ability to prove who you are, you’re eventually going to find yourself arrested for loitering, trespassing, shoplifting, vagrancy, public urination, public intoxication, indecent exposure or any number of other petty crimes that happen along the way when you’re just trying to survive on the streets.

The result being that the city’s jails double as unofficial homeless shelters. So one of the badges that goes along with being homeless is the Unemployability badge, because you now have a criminal record thanks to your inability to find a place to live, stay out of the way, prove who you are or pay a bond or a fine.

And of course, the only thing the average homeless person is actually guilty of is generally addiction, mental health issues, or a disability of some kind. They end up on the streets because they can’t get the help they need.

Or they can’t find work that pays a living wage — a situation that’s happening in my own household, where my 62-year-old husband, a proud Army veteran who has worked in the computing field for the better part of four decades suddenly finds himself laid off and interviewing for a job at Wal-Mart that pays $9 an hour with no benefits. Which adds up to $360 a week, with no health insurance, before the Federal government takes their pound of flesh.

So let’s just say that when I contemplate what it must be like for someone to slide into homelessness, I can empathize from a very real place right now.

In conclusion, this Christmas, could we try to take seriously what our faith teaches?

Real wisdom, God’s wisdom, begins with a holy life and is characterized by getting along with others. It is gentle and reasonable, overflowing with mercy and blessings, not hot one day and cold the next, not two-faced. You can develop a healthy, robust community that lives right with God and enjoy its results only if you do the hard work of getting along with each other, treating each other with dignity and honor. (James 3:17-18)

But he’s already made it plain how to live, what to do, what God is looking for in men and women. It’s quite simple: Do what is fair and just to your neighbor, be compassionate and loyal in your love. And don’t take yourself too seriously — take God seriously. (Micah 6:8)

When he finally arrives, blazing in beauty and all his angels with him, the Son of Humanity will take his place on his glorious throne. Then all the nations will be arranged before him and he will sort the people out, much as a shepherd sorts out sheep and goats, putting sheep to his right and goats to his left.
Then the King will say to those on his right, “Enter, you who are blessed by my God! Take what’s coming to you in this kingdom. It’s been ready for you since the world’s foundation. And here’s why:
I was hungry and you fed me,
I was thirsty and you gave me a drink,
I was homeless and you gave me a room,
I was shivering and you gave me clothes,
I was sick and you stopped to visit,
I was in prison and you came to me.” (Matthew 25:31-40)

To solve this challenge, we as a people of faith need to start practicing what we say we believe. We need to get to the root of what causes homelessness and do as scripture teaches us. These folks are not numbers or statistics… they are God’s children, and we will answer for what we do for and with these precious creations of God. So tonight, tomorrow morning and in the days ahead let us set aside the soundbite-friendly distractions of sideshows such as “putting Christ back in Christmas” and instead fight for something that has the potential for lasting impact.

Let’s put Christ back into what it means to be Christian.