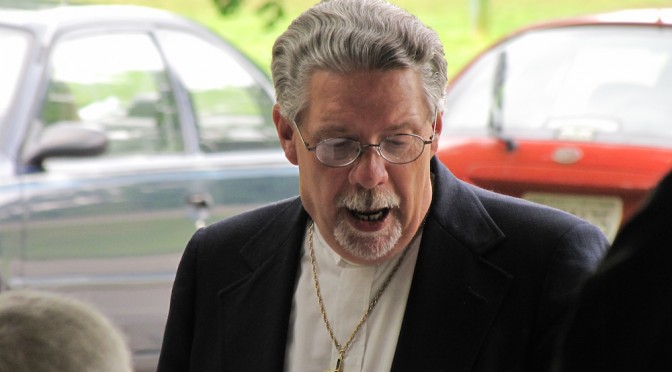 Have you ever had one of those times when you felt like no matter what you did, no one was thankful or appreciative of the amount of effort it took to do what you did? Maybe at some point in your life you took on a project that took all your ability to think about how it would affect you emotionally, spiritually, and your job security. When you went ahead, did the project, and got it completed, there were those who simply looked at you and said of the project, “It’s about damn time you got this done!”

Maybe you have a relationship with someone that, for whatever reason, cannot get the phrase “I love you” out of their mouth and into your ear. Then one day after an especially trying moment or close call, you hear the word’s you have always wanted to hear; “I love you!” and your response on the inside is, “about time”, or “this is what it took for you to say it?” Or “you don’t mean it!” A few days ago, we in the LGBTQIA community heard the following words:

“I think same-sex couples should be able to get married.”

A simply sentence, a simply opinion, just eleven words. In fact many folks, me included, have said those exact same words. Yet, the impact of our words compared to this statement from the other day, from no less then the President of the United States pale in their impact. For the first time in the history of the United States, a sitting President has said to me, to my sisters and brothers: our relationships are valid! Of course the responses to these eleven words were immediate. As one might expect from the religious and political right the reaction was anything but kind, confirming, or acknowledging of the deep soul searching it took to say these words. However, it is with sadness and frustration that some of the responses from the other side of the political and religious spectrum have not been much better. Now remember my opening for this blog as you read these quotes: “Less than 24 hours after Obama came out for marriage equality, organizers from GetEQUAL from all over the country came together to thank the president, but remind him that actions speak louder than words, and there is more to equality and justice.” Similarly, a friend of mine looked me dead in the eye and said, he doesn’t really mean it; it is just political it is not that big of deal. And this gem from the Log Cabin Republicans:

“That the president has chosen today … to finally speak up for marriage equality is offensive and callous,” the organization said in a news release. Obama announced his position a day after North Carolina voters amended their state’s constitution to define marriage only as a union between one man and one woman.”

This headline from a blog called the gawker.com:

My dear friend and Sister Rev. Candace Chellew had this to say:

I know people are pissed with me for not properly bowing and genuflecting when Pres. Obama finally made the no-brainer of a decision to support marriage equality…Thank you, Mr. President for you decision. Greatly appreciate that you’ve come into the 21st century. But, all it does is guarantee that we will not talk about the real issues our country faces, because the media loves the anti-gay circus so very much.

So yes, I recognize the obvious questions follow such an announcement in a political year …. Why Now? Is this Hot Air or Truth? In this day when a politician words no longer really mean all that much, do we believe this statement, is there anything past this? Of course there is the ever present activist question in our community ….WHERE DO WE GO AND WHAT DO WE DO FROM HERE! I believe that this is a step forward with immeasurable benefits both in the short term and the long term. It is yet one more building block to add on to what so many of our community have put in place with so much effort in to building towards true equality. We need to pause and take stock of where we really are, what we have to work with, and then lay plans as to where we can go from here. For us older more jaded folks these eleven words give us the sense that we are being heard and change is coming. More slowly then we would like, but it is coming. For the younger generation these eleven words say they count and they are worthy. Think of that 14 year gay kid who hears the President of the United States say those eleven words, just maybe they will not swallow the wrong end of a gun. Much as a river running through the land ever so slowly changes the landscape, these eleven words have changed the landscape for the LGBTQIA community for the good. So regardless of political preference, ideology or party, we owe this President of the United States a debt of gratitude for the first time in history to saying, “I think same-sex couples should be able to get married.” Those eleven words have changed the landscape of this country forever and there is no turning back…no turning back. Thank you Mr. President!