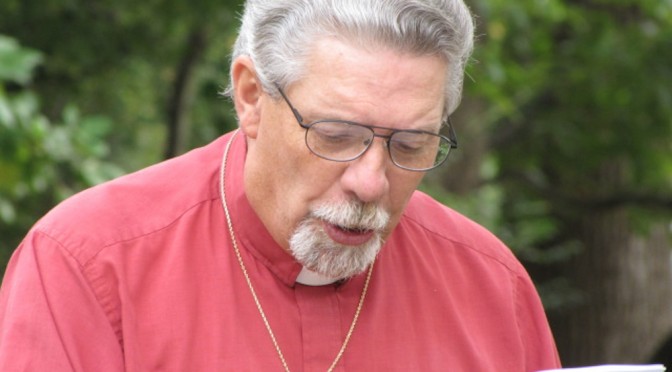 My mentor of blog writing says one should never repeat a blog post, but in view of some of the emails we received from young people this week at the church, I really feel a need to give this witness again.

The pain and anguish expressed in some of the messages give me pause and the recognition that despite vast improvement for our community, it is still devastatingly hard to grow up gay.

When I was 13, during the month of January 1968 I wrote a paper for my 8th grade English class on why Dr. Martin Luther King was my hero. No big deal, except I was a white kid in an all white school.

As anyone who reads my blog with any regularity will tell you my grammar is awful and so it was no surprise I got an A for content but a D for grammar. With that paper my life became complicated. I was now known as a n***** lover.

There was no end to the jokes and nasty notes left at my locker or in my schoolbooks. It should also be noted at about the same time I had gone through a sudden growth spurt. So by the time the school year had ended I was 5’9” and 120 pounds.

I was kind of geeky looking to say the least.

At the same time I was part of a family who included a father who had a very strict definition of what it was to be a “man” and a mother who insisted on me having “school clothes” and “play clothes”. What was the problem with this? Nothing except when I went to school I was dressed in a freshly ironed shirt, a pair of dress pants and polished shoes, and a Princeton haircut.

Dressed this way amongst kids in blue jeans, tennis shoes and long hair I stood out as not being particularly “manly”.

For the record it should also noted at the age of 9 I had figured out that I was not same as everyone else when it came to issues of sexuality. I had more than a passing interest in men.

Long story short I figured out in that time I was a homosexual. This probably would not have been a bad thing except for my step uncle taking advantage of my curiosity and literally raping me until I was 13 and he left for the army.

At one point he took me to a place no young person should ever have to go physically. The whole time he did this to me, he told me I was nothing but a fagot and if I ever told anyone I would be thrown out of the family for being a queer. I threw out bloody underwear that summer out fear of being found out.

There was no one to tell and no place to go for support or to get help. The only positive thing to come out of this experience was that I learned I would never make a person do something sexually they did not want to do.

So now let us fast forward back to the end of 8th grade school year. A friend of mine showed up to my house one day with some of his father’s naked girl magazines and a jar of Vaseline. We experimented that day. Compared to what I had already been through this was great and I had my first official crush.

That is until he told his friends.

The bullies came out in mass numbers. Much like how vultures circle prey which is about to die. Now, I was a marked kid…called a homo, fagot, pushed into lockers and cornered in the locker room. I was followed home with kids calling me names. Eggs were thrown at our house. We would get phone calls at our house asking for me because they wanted a blowjob. This went on the entire 4 years of high school almost daily. So my days in high school were spent in complete torment and fear that in the end no matter what I wanted to do or did I was a loser.

I was a n***** lover and a fag. Those days of high school were hard for me. There was no place to go for support or understanding of what I was feeling, who I was or any kind of acceptance. To many I was just at minimum weird and at worst a pervert. I later found out that my struggles and experiences caused untold grief for my family and especially my sister.

Ironic isn’t it, my sister was bullied because of her brother. While most sisters get to look up to their older brothers, mine probably spent most of her high school days wishing I never existed.

Those times made it difficult for my friends too. For the mention of my name brought laughter and jokes. I have often wished there could have been a different way, a better way. So why am I sharing this tonight?
Because the statistics around “bullying” are mind boggling. Very little has done to stop it or to provide support when bullying has happen.

In recent years, a series of bullying-related suicides in the US and across the globe have drawn attention to the connection between bullying and suicide. Though too many adults still see bullying as “just part of being a kid,” it is a serious problem that leads to many negative effects for victims, including suicide. Many people may not realize that there is also a link between being a bully and committing suicide.

The statistics on bullying and suicide are alarming:

Suicide is the third leading cause of death among young people, resulting in about 4,400 deaths per year, according to the CDC. For every suicide among young people, there are at least 100 suicide attempts. Over 14 percent of high school students have considered suicide, and almost 7 percent have attempted it.
Bully victims are between 2 to 9 times more likely to consider suicide than non-victims, according to studies by Yale University
A study in Britain found that at least half of suicides among young people are related to bullying
10 to 14 year old girls may be at even higher risk for suicide, according to the study above
According to statistics reported by ABC News, nearly 30 percent of students are either bullies or victims of bullying, and 160,000 kids stay home from school every day because of fear of bullying

Bully-related suicide can be connected to any type of bullying, including physical bullying, emotional bullying, cyberbullying, and sexting, or circulating suggestive or nude photos or messages about a person.

My heart is yet again broken by society’s inability to support the diversity of creation, to see the beauty of that diversity and to understand our real strength comes in that diversity.

How did I get through it? I really don’t know. I do not see myself as particularly strong or smart. I do know what it is to feel totally alone, unsupported and mocked.

Funny even today I can still feel that way. Maybe I got through this and lived to tell about because when I was at my lowest there was a United Methodist Pastor by the name of Rev. George Groh, who when he heard I was in trouble and seriously in the process of putting a bullet into my head dropped what he was doing and came to me. 20 miles he drove at 7 in the morning.

Then he pulls out his little pocket bible and reads to me the 22nd Psalm, the whole Psalm not just the part we hear read on Good Friday in church:

So, this is why I wrote this and now share again. To stand witness for our young people and say to them you can get through this.

To say to them you are not alone and the bullies are just that, bullies.

They pick on you because they can’t be honest and content with themselves.

I write this in the hope a message will go out loudly and clearly from other pastors and spiritual leaders who will walk the path of the Reverend George Groh, and hold these kids and look them in the eye and say to them; “You are God’s child and you are not a mistake!”

I write this because despite how it might feel right now, “tomorrow will be better”, I know because I have been there.